Vegan Carne Asada Tacos are perfect for Taco Tuesday or any night of the week! Made with TVP and a smokey, citrusy marinade, you won't believe how well this recipe replicates the flavor and texture of Carne Asada.

At our house, we take Taco Night seriously, so when we decided to create a Vegan Carne Asada recipe, you can bet we tested it again, and again, and again... The result is the delicious TVP carne asada that hits all the right notes of citrusy and smokey with a touch of spice. Pile it on a corn tortilla for an absolutely perfect taco fake-out.

For this recipe, I decided to use larger TVP crumbles than what you'd find in my bacon bits or vegan spaghetti and meat sauce recipes. The idea is to replicate street-taco-style meat that has been chopped up and served on a corn tortilla with simple toppings.

My husband and I worked together on this one to create the perfect TVP marinade that replicates all the delicious flavors of carne asada. Along with our vegan street tacos and vegan fish tacos, these vegan carne asada tacos have truly become a staple in our house and I hope you love it as much as we do!

You'll love this Vegan Carne Asada recipe because it's:

What is carne asada?

Carne asada literally translates to grilled meat, and we aren't doing either of those here, so what gives? The truth is we were inspired by the marinade and the final product.

Carne asada is normally a steak that has been marinated in citrus and spices. Since we're using TVP to replicate the meat, it makes more sense to cook it in a skillet than grill it. The end result does a really nice job of replicating the street-taco-style carne asada that you can grab from vendors in Mexico.

TVP, aka Textured Vegetable Protein, is a vegan meat substitute made from soy. You can read more about it in my vegan spaghetti and meat sauce post.

Can this be gluten-free?

To make this vegan carne asada gluten-free, be sure to use gluten-free soy sauce in the marinade. Also be sure to check the TVP to make sure it is certified gluten-free.

We like to serve this as the main protein on tacos with a side of Instant Pot Pinto Beans. Corn tortillas are my preference here, but you can use whatever taco you like. These also make a great addition to any vegan taco bar!

Some of my favorite toppings and garnishes for vegan carne asada include:

Can I make it ahead?

You can make the TVP Carne Asada up to a day in advance. Just reheat in a skillet before serving. 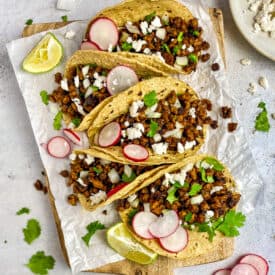 Did you try this recipe? Have a question? Just leave a comment below and I'll get back to you ASAP!